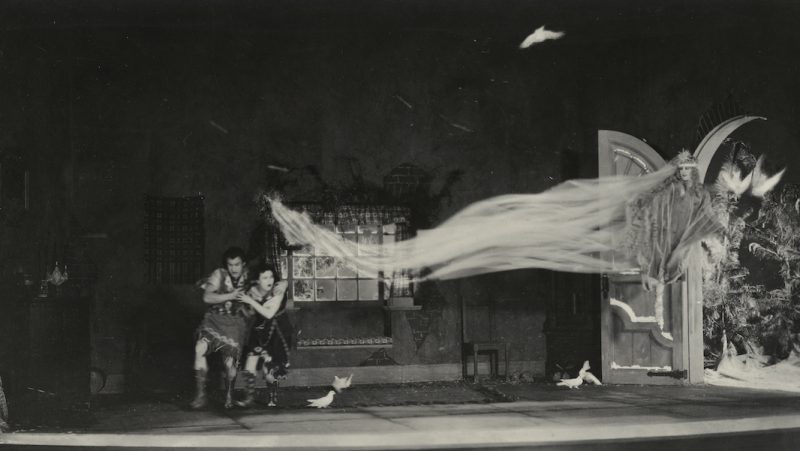 THE DAY OF FOOL’S PARADISE

THE WOMAN WORTH MILLIONS FEATURES WEIMAR ERA STAR ELLEN RICHTER
IN THE ROLE OF AN ARMENIAN PRINCESS.

Fool’s Paradise (1921), based on Leonard Merrick’s story The Laurels and the Lady and directed by Cecil B. DeMille will be screened today at 9PM at the Teatro Verdi for the 40th edition of Pordenone’s Silent Film Festival. Screenwriters Beulah Marie Dix and Sada Cowan worked to make their adaptation more varied and entertaining. One of the changes involves the setting of the story, which dispenses with the South African locale and moves the action to Texas and then Siam, where the girl who steals the hero’s heart goes to study traditional religious dances. Siam was chosen because a friend and collaborator of DeMille had an extensive knowledge of the country.
The film’s great surprise lies in the sense of humour of the two young leading ladies, Dorothy Dalton, whose name at the time could be found billed over Rudolph Valentino’s, and Mildred Harris, who had just divorced Charlie Chaplin. The male lead – also young but already very popular – was Conrad Nagel, who would go on to be one of the founding members of the Academy of Motion Picture Arts and Sciences; in 1940 he received an honorary Oscar for lifetime achievement.

In the Ellen Richter retrospective, Trieste, Portorose and Pirano are some of the Italian cities (in addition to parts of Eastern Europe and Turkey) crossed by the star of Die Frau mit den Millionen (The Woman Worth Millions, 1923) during a lengthy international chase. This may be the best of Richter’s four “Reise und Abenteuerfilme”, and in this adventure, she masterfully plays an Armenian princess who wants to save her father, imprisoned by a corrupt pasha. Though it lacks explicit references, the film’s parallels to the recent Armenian genocide of 1915 were obvious, to the extent that the Berlin-based Turkish community demanded the film be banned, citing a distorted account of the Turkish-Armenian conflict and the apparent slander of members of the Turkish ruling dynasty. Relations between the two countries became so strained that a compromise had to be found by removing captions mentioning places in either country and even changing some of the characters’ names: that of comedian Karl Huszán-Puffy’s character Kleptomanides (a clear allusion to his lack of morals and greed) is shortened to Manides. The three parts of Die Frau mit den Millionen, directed by Richter’s husband and fellow film partner Willi Wolff, will be screened at the Teatro Verdi: the first two at 10.30AM, “The Shot in the Paris Opera House” and “The Prince Without a Country”, and the third at 2.30PM, “Constantinople-Paris”.

5PM will see the conclusion of the festival’s tribute to athlete and actor Reginald “Snowy” Baker. Baker was a tireless champion of Australian cinema and convinced that it could reach the status of the American film industry, which he joined in 1919 when he went to Hollywood, hoping to recruit experts for his own projects. After a couple of films shot in Australia, Baker returned to the United States, and although his acting career was brief he was soon part of Hollywood’s social and sports scene, becoming director of Pasadena’s Riviera Country Club and helping to organize the Los Angeles Olympics in 1932. Today’s features at 5PM at the Teatro Verdi are The Empire Builders and The Sword of Valor, both released in 1924. The first is a colonial Western set in South Africa and the second is set on the north coast of Spain and the French Riviera (though mostly shot in the hills of Southern California). Snowy Baker’s riding skills are clear for all to see, and he had his favourite mount, Boomerang the Wonder Horse, brought from Australia to Hollywood.

The online programme for Tuesday, October 5th on MYmovies includes Fool’s Paradise at 9PM Italian time. Book presentations online will be at 5PM, and today’s titles are Effemeridi del film by Mariapia Comand and Andrea Mariani, a study on ephemeral documents (scrapbooks, cigarette cards, souvenirs, stickers, etc. made for short-term film promotion) as a source for the history of cinema; and Behind the Light. The Extraordinary life of Luca Comerio by Matteo Pavesi and Marco Accordi Rickards, an applied game produced by the Cineteca Italiana to publicize  its collections and mission, above all involving our youngest viewers in discovering the adventurous life of the film pioneer Luca Comerio.