The trailer is a small monument of traditional animation: Richard Williams has gone back to the technique of 1905, with every frame a drawing on paper (no cels, no computers). On June 13 the logo was shown at the Academy’s Samuel Goldwyn Theater, before the screening of Frank Borzage’s Humoresque. 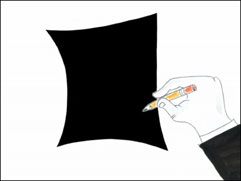 Academy Award-winning independent animator, animation historian, author, teacher and lecturer John Canemaker, who was a recipient of the Giornate’s 2007 Jean Mitry Award, has created a new animated trailer for the festival.
This 35-second film, in b&w and colour, is also a tribute to three pioneers of silent animation. First we see the artist’s hand draw Fantoche on a black sheet of paper. This character, created just 100 years ago by Emile Cohl, then changes into Winsor McCay’s colourful Little Nemo, who pirouettes and bows to the audience, to be replaced in turn by Felix the Cat. Otto Messmer’s famous feline has an idea, which makes him grin in satisfaction, showing four pointed teeth. The idea? To use his tail as a lasso, to rope the Giornate logo, and drag it onscreen.
Film historian Russell Merritt was able to see it recently while visiting the Cineteca del Friuli, and immediately wrote to the filmmaker: “We watched it again and again, oohing and aahing. It’s an absolute gem! I hope I don’t have to choose my favorite moment: Felix giving his toothy wink or Fantoche’s burst of exuberance.”
The animated trailer will be transferred to film and shown exclusively at the Verdi, with live musical accompaniment: “Our pianists will do wonders,” said festival director David Robinson.

In the very first years of Pordenone Silent Film Festival, the Dutch Haghe Film, the development and printing laboratory at the forefront of film restoration, became an important partner of the festival. One of the supervisors there, Livio Ricci, of Italian origin, was eager to form new connections and, also thanks to this, in 1992 the idea of having “our own” semi-animated opening sequence in 35mm was born. Carlo Montanaro, on the festival’s board of directors, came up with a storyboard and, through communication by airmail and over the phone (the internet, mobile phones and such were still in their infancy), the XI edition of the festival (10th-18th October) opened with a brand new logo. We were one of the very first festivals to have one and we went on to use it until 2004. In 2011, on their 30th anniversary, the opening credits were re-interpreted and happily updated.

While temporarily hosted in Sacile, Giornate decided to change the opening sequence again, and so the festival launched a call at the Scuola di Animazione of the Centro Sperimentale di Cinematografia in Chieri (Torino). After the students’ storyboards were received, the one from Michele Tozzi and Elena Forcato was selected. The two artists were invited to present their work to the audience in Sacile during the festival’s XXIV edition in 2005. This opening sequence was used in the next two editions of Pordenone Silent Film Festival.