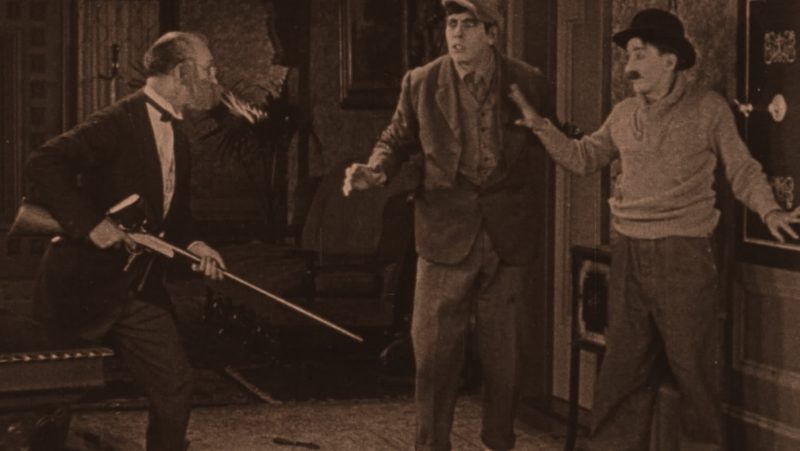 There’s the promise of laughter at the grand finale of the Pordenone Silent Film Festival – Limited Edition, and in these sad times, comedy is surely the best panacea. What better doctors than the legendary Stan Laurel and Oliver Hardy – or just the more familiar Laurel and Hardy – not as a couple but when they were still performing independently? Thanks to Lobster Films in Paris and the Library of Congress in Washington, DC, they’ll be the stars, separately, of the special closing event, “Laurel or Hardy”, streamed on Saturday 10 October (starting at 8.30 pm Italian time) accompanied by Neil Brand. A live repeat screening will be held in Pordenone’s Teatro Verdi on Sunday 11 October at 4.30 pm with live accompaniment by the musicians of the Zerorchestra.

It was a truly mysterious artistic alchemy that generated the most famous comic duo of all time: their personalities and features – not just the physical ones – could not have been more different. British by birth, part of a family of actors and with substantial music hall and vaudeville training, Stan Laurel was equally regarded as performer, writer and director, while Oliver Hardy, an American from Georgia, was from an English-Scottish family who were completely foreign to the entertainment world. As a child he had a passion for singing, and film arrived later, when he was about 18. Favoured by his considerable physical presence, Oliver (known then by his nickname “Babe”) lost no time in finding a place in comedy, initially as the fat villain.

The Giornate is presenting two of his films, The Serenade (1916) and The Rent Collector (1921), directed and starring Larry Semon, one of the great Hollywood comedians, famous in Italy as Ridolini. Semon, who was very generous with the actors who worked with him, immediately recognized his talent, and they became great friends, sharing a love of golf, which became an obsession for Hardy.

We find Stan Laurel as an actor in Detained (1924) by Percy Pembroke and Joe Rock, with a screenplay by Tay Garnett (who later directed The Postman Always Rings Twice) and in the parody of Rudolph Valentino (who becomes Rhubarb Vaselino) in the only surviving reel of When Knights Were Cold (1922), a costume drama which, as was usual at the time, made use of the sets built for other grander and more costly films. The highlight of the programme is the world premiere of the reconstructed Moonlight and Noses (1925), with Laurel as director and screenwriter. This print integrates the existing copy in the Library of Congress with a 16 mm copy from the National Film & Sound Archive in Canberra, where it was preserved perhaps due to the prominent presence of Clyde Cook, the Australian comic idol. The film also features the heroine of the first King Kong, Fay Wray, who was the unforgettable guest of the Giornate in 1999, when the festival was held in Sacile.

The “Laurel or Hardy” programme is preceded in the afternoon (from 5 pm Italian time) by another interesting film, newly restored by the Danske Filminstitut in Copenhagen: Ballettens Datter (Daughter of the Ballet, 1913), directed by Holger-Madsen, one of Nordisk Film’s leading directors during the golden age of Scandinavian cinema. The protagonist of this “modern comedy” – as it was defined in the Danish programme of the time – is Rita Sacchetto, the German actress and dancer of Austrian-Italian origin (her father was Venetian) who was famous for having brought Tanzbilder to international stages in the 1910s: these were dance acts inspired by the paintings of artists such as Botticelli and Velázquez. The film highlights her skills in both theatre and dance, and she plays the part of the dancer Odette Blant with whom the Comte de Croisset falls in love after admiring her performances. In order to marry him Odette promises to leave the stage, but she misses her calling and at the invitation of the theatre manager ends up agreeing to replace an injured colleague. In 1917 Rita Sacchetto married a Polish count and her career as a dancer came to an abrupt halt in 1924 when a friend of her husband accidentally shot her in the foot.

After the evening programme, Jay Weissberg will be joined by Rob Stone of the Library of Congress, Culpeper, Virginia; Serge Bromberg of Lobster Films, Paris; David Robinson, Director Emeritus of the Giornate; Victoria Riskin, daughter of Fay Wray, in Martha’s Vineyard, Massachusetts; and pianist Neil Brand in London.