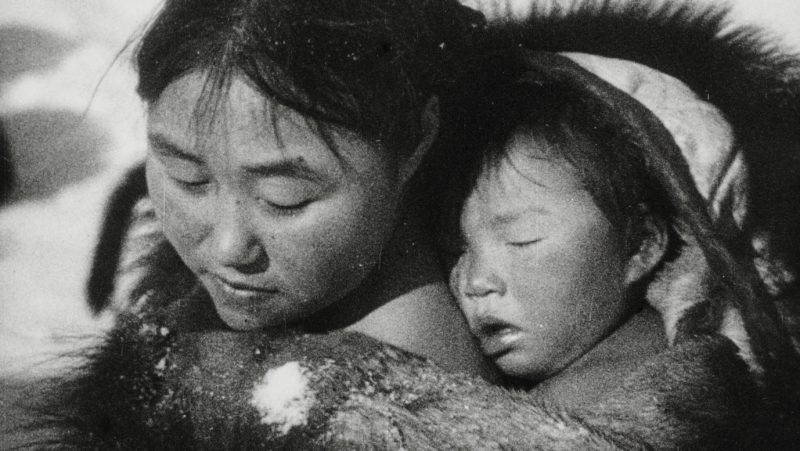 THE SPECIAL EVENT NANOOK OF THE NORTH

On Sunday 2 October, the Norma Talmadge retrospective continues with 3 Vitagraph shorts plus Charles Miller’s feature Ghosts of Yesterday, an adaptation of the play Two Women by Rupert Hughes, itself based on a work by Friulian playwright Teobaldo Ciconi, La statua di carne.

The most anticipated event at the Giornate del Cinema Muto on Sunday 2 October is Nanook of the North (1922) by Robert Flaherty, at 21.00 in the Teatro Verdi. The director’s first film, it was immediately regarded as a masterpiece, rightfully entering the annals of film history as the first example of documentary filmmaking.  Flaherty became a filmmaker out of his love for the Inuit people, whom he already knew and had lived and worked among for more than a decade as an explorer and mineral researcher, and he wanted to tell the story of their lives. He did this through the character of the Arctic hunter Nanook and the harsh struggle with Nature he endured to make a living for himself and his family. Flaherty’s principal aim was to evoke the viewer’s empathy with the images: consequently he did not limit himself to a mere filming of reality, but when necessary he constructed it poetically, assisted in this by the Inuit themselves, who proved not only to be consummate actors but also capable technicians, who could even develop film on location. Nanook was filmed between August 1920 and the following year in Port Harrison, now Inukjuak, and was inspired by a true story. Last June, in the same location on the east coast of Hudson Bay in Canada, the Inuit community gathered to celebrate the centenary of the film that has become an essential part of local culture.

For Nanook, Gabriel Thibaudeau has composed a new score which sensitively and intelligently also draws inspiration from the sounds of Nature, and uses throat singing by two Inuit artists, Nina Segalowitz and Lydia Enok.

The Giornate’s Norma Talmadge retrospective conitnues the morning of Sunday 2 October at 9.00 in the Teatro Verdi, with a show comprising 3 Vitagraph shorts and the 1918 feature Ghosts of Yesterday, directed by Charles Miller, in the sole existing copy, sadly incomplete as it is missing the final reels. It is an adaptation of a play by Rupert Hughes, Two Women, which was in turn derived from a work by the Friulian playwright Teobaldo Ciconi, La statua di carne. Mario Almirante’s 1921 film based on Ciconi’s play was shown in a past edition of the Giornate; and another version appeared in 1943, La statua vivente, by Camillo Mastrocinque, which was recently restored by the Cineteca del Friuli. Common to both films is the theme of the double, of a lost love reappearing via a reincarnation. Another element is also present in Ghosts of Yesterday, the myth of Pygmalion: an artist loses his first love, and to complete her portrait hires a model who looks like her. Playing both roles gave Talmadge a chance to express her talent to the full, confirming her as a star assoluta, on a par with Chaplin, Fairbanks, and Pickford, one of the few who could guarantee sold-out theatres, according to exhibitors.

On Sunday 2 October, at 11.45 in the Teatro Verdi, the Ruritania retrospective presents a key work, the 1913 version of The Prisoner of Zenda, directed by Edwin S.Porter, a pioneer of American cinema. Also not to be missed, especially for history buffs, is the Serbian film Ceremonies in Banjica: The Transfer of Old Flags to New, showing an eleborate military ceremony in honour of King Peter I, a monarch who understood how to use cinema as an instrument of propaganda.

Every year the first Sunday afternoon of the Giornate is reserved for the young musicians of A colpi di note (Striking a New Note). This year, make an appointment at 14.30 in the Teatro Verdi with the students of the Pier Paolo Pasolini Secondary School of Pordenone and the “Guglielmo Marconi” HIgh School of Music of Conegliano, who will perform their original music commentaries for four masterpieces of Italian silent comedy: Kri Kri Detective (1912), Kri Kri ha perduto il cappello (1913), Robinet aviatore (1911), and Fra i due litiganti (1917).
The other events in the festival’s Sunday program are: at 16.10, Segundo de Chomón in Barcelona (Ibérico Films), and at 21.00, preceding Nanook of the North, Le Papillon machaon (1911/1923), La Pêche aux crocodiles sur la Rivière Klang (1911/1923), and Among the Māori of New Zealand (1915-1917).
The festival’s online program, on MYmovies, continues on Sunday 2 October at 17.00 with two Norma Talmadge films, Mrs. ‘Enry ‘Awkins (1912) by Van Dyke Brooke and the feature Yes Or No (1920) by R. [Roy] William Neill; and at 21.00, the animation short Die große Liebe einer kleinen Tänzerin (1924) by Alfred Zeisler and Viktor Abel, followed by Just Around the Corner (1921), directed by screenwriter Frances Marion.

The FilmFair, featuring books and cinema-related material for collectors, continues: from 10.00 to 20.00, on the Second Floor of the Teatro Verdi.

Le Giornate del Cinema Muto have been realized thanks to the support of the Regione Autonoma Friuli Venezia Giulia, the Ministero della Cultura – Direzione Generale Cinema, the Comune di Pordenone, the Pordenone-Udine Chamber of Commerce, and the Fondazione Friuli.