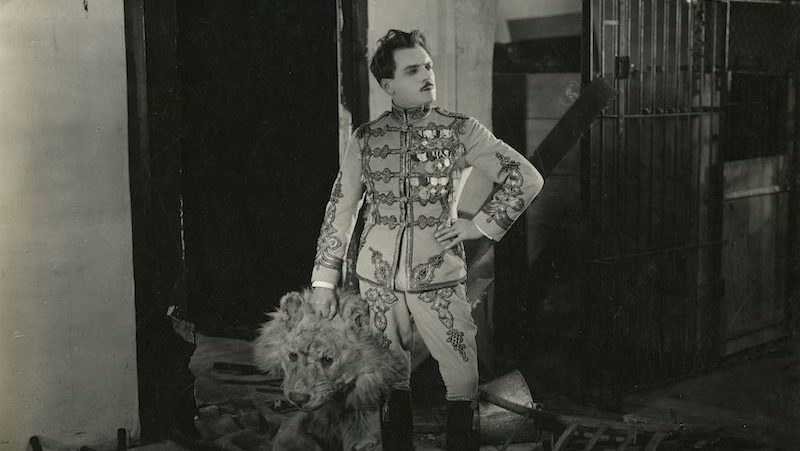 Max Linder could be considered a patron of the Giornate. Back in 1982, when little was being said about silent cinema, Pordenone’s Cinemazero and the Cineteca del Friuli launched a small retrospective honouring the great French comedian; it was attended by a few historians and critics. The event was a rediscovery, its success prompting the organizers to develop and deepen the exploration and study of cinema from its origins to the sound era. Max Linder was the first successful international comedian – Chaplin mentions him as a great influence – and he created the elegant and worldly character of Max, donning a black moustache, top hat and white gloves in the Paris of the Belle Époque. Linder was an actor, director and screenwriter who worked on more than 500 films, most of which have been lost. Max Der Zirkuskönig (King of the Circus) was amongst them, but thanks to a complex reconstruction with copies assembled from many archives, the film was saved by Lobster Films.
For Max Der Zirkuskönig, Linder was hired by the newly instituted Vita Film, an Austrian company that hoped the French star’s presence would help them break into the international market. The film did indeed do very well in many countries – unlike Linder, whose instability led to the death of his young wife and his suicide. The world premiere will take place today at 9PM at the Teatro Verdi of Pordenone alongside the Jean Mitry Awards ceremony. The Festival celebrates its 40th edition by having its patron on the official poster alongside Vilma Banky, his co-star in the film. Neil Brand (piano) and Frank Bockius (percussion) will provide the live musical performance for Max Der Zirkuskönig.

In the retrospective on American women screenwriters Kentucky Pride (1925) stands out because of its director’s name, John Ford. While the film is notable for its talking horses – a brilliant idea of screenwriter Dorothy Yost, who would subsequently write for Fred Astaire and Ginger Rogers – the fact that it was by the greatest director (according to Orson Welles) should be an incentive to watch this very rare film. The screening is at 2:30PM at the Teatro Verdi with Philip Carli playing the piano. The film was restored by the Museum of Modern Art with funding from Twentieth Century Fox. Directed by a barely thirty-year-old Ford, Kentucky Pride already showcases his key themes: duty, pride in tradition, love of nature and, particularly in his Westerns, the constant presence of horses. The film’s protagonist is Virginia, who narrates to her fellow horses, the citizens of Kentucky and the audience. One of Virginia’s friends was the legendary Man o’ War, whose fame and triumphs garnered him the title of the greatest racehorse of the twentieth century. The human cast boasts the presence of Henry B. Walthall, known for his partnership with D. W. Griffith and eventually with Ford himself. Walthall was one of the greatest actors of all time, a personality that just leaped out from the screen, as Ford declared in an interview with Peter Bogdanovich.
If Kentucky Pride is seen from the horses’ perspective, then the film preceding it, Up in the Air After Alligators (1919), is from the point of view of a crocodile. The short is part of a series of 50 travelogues for a sports magazine and is a great example of the writing of Katharine Hilliker (1885–1965).

In the afternoon, at 5:30PM, the Giornate will screen three Japanese Vitagraph short films from 1910, when the growing power of the Japanese empire began to look like a threat to the United States. Many American films showed the same anxiety, but these three Vitagraph shorts approach the country through a different lens, starting with the casting of mainly Japanese actors. The titles include Ito, the Beggar Boy, from 1910, rediscovered in Warsaw’s Filmoteka Narodowa – Instytut Audiowizualny (FINA) collections.
To complete the “Japanese” programme, we have two Russian Pathé shorts from 1913, containing the sole known moving pictures of dancer and actor Ohta Hisa, known by her stage name, Hanako (1868–1945). Hisa was a diminutive Japanese performer (some say she was little more than 4 feet 6 inches feet tall) whose travels through Europe and America earned her success, especially in France, where Rodin made numerous sculptures of her. The films of her shows in Moscow are by the Russian cinema pioneer Yakov Protazanov. John Sweeney will accompany on piano.

Friday opens at 10:30AM with another restoration by Lobster Films, Der Flug um der Erdball (The Flight Around the World, 1925), directed by Willi Wolff and starring Ellen Richter. The film will be screened in two parts, with live musical performances by Günter Buchwald and Stephen Horne respectively. The Film-Kurier critic wrote that this was not only Ellen Richter’s best film, but also the best German travel and adventure film.

The online programme of today on MYmovies starting at 9PM (Italian time) presents the wonderful Moral with Ellen Richter. In our last book presentation – as always online, starting at 5PM – Alberto Anile will discuss his book Alberto Sordi (Edizioni Sabinae, 2020), a close look at the life of the Italian actor and director, rich in archival material. The Associazione Italiana per le Ricerche di Storia del Cinema (AIRSC) presents Immagine: note di cinema 20-21 (Persiani 20-21), the latest two volumes of the oldest Italian journal for film lovers and the association’s official publication.