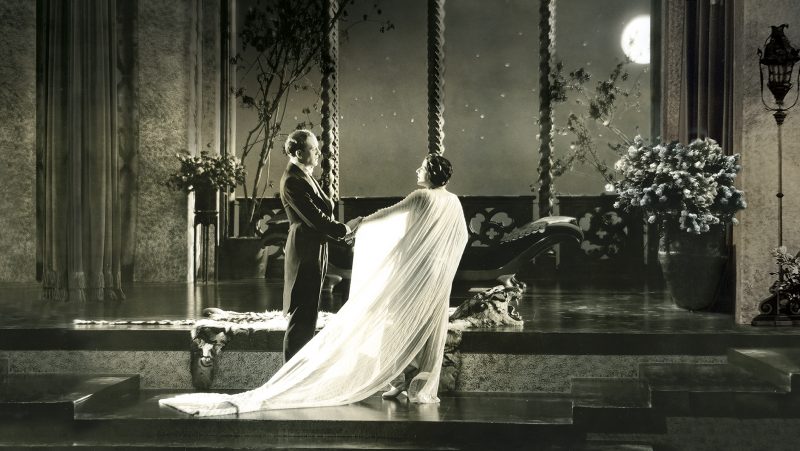 At the Teatro Verdi in Pordenone, 1-8 October 2022
OPENS WITH THE WORLD PREMIERE OF THE NEW RESTORATION OF THE UNKNOWN
BY TOD BROWNING, STARRING LON CHANEY AND JOAN CRAWFORD.

OTHER SPECIAL EVENTS INCLUDE ROBERT FLAHERTY’S NANOOK OF THE NORTH; THE RIOTOUS COMEDY UP IN MABEL’S ROOM STARRING MARIE PREVOST; AND THE FIRST FEATURE FILM SHOT IN ICELAND, ONE HUNDRED AND TWO YEARS AGO.

THE MAJOR RETROSPECTIVES ARE DEDICATED TO “RURITANIA” AND AMERICAN STAR NORMA TALMADGE.

THE OPENING AND CLOSING EVENTS

The 41st edition of the Pordenone Silent Film Festival opens Saturday, Oct. 1, at 9 p.m. at the Teatro Verdi in Pordenone with a screening of Tod Browning‘s The Unknown (US 1927) starring Lon Chaney, a cult film that marks the culmination of the collaboration between the director and the actor known universally as “the man of a thousand faces.” Here however, Lon Chaney doesn’t rely on his famed facial transformations but rather on real physical torture: he plays a circus performer with no hands or arms who harbors a desperate love for his young partner, played by 23-year-old Joan Crawford. For the future Oscar-winning star, this was an extraordinary education because, as she later declared, it was while watching Lon Chaney act that she learned more than from anyone else in the course of her career. This is not the first time The Unknown has been programmed at Pordenone (the 1994 screening was accompanied by John Cale, formerly of the Velvet Underground), but two things make this year’s screening especially noteworthy. First is that this is the world premiere of a new restoration incorporating a rediscovered print from the Narodni Filmovy Archiv in Prague and restored by the George Eastman Museum in Rochester, which is more than 10 minutes longer than the one known until now and almost identical to the original length, with scenes that have not been seen for decades. This additional footage makes it “a new film,” as noted by Mexican musician José Maria Serralde Ruiz, a regular at the festival who was commissioned by the festival to compose a new score, played by the Orchestra San Marco of Pordenone.

Another classic title is screening closing night on Saturday, Oct. 8 (with a repeat the following day, Sunday, Oct. 9 at 4:30 p.m. also at the Teatro Verdi in Pordenone): Alfred Hitchcock’s last silent film, The Manxman (1929). Long underrated, The Manxman is the subject of new interest from critics and scholars who see in it many of the elements that would characterize the director’s later output, including his fascination with blonde actresses such as Anny Ondra, who here gives life to a complex and moving female figure and whom Hitchcock would also cast in his next film, Blackmail. British musician Stephen Horne has written a new score that will be performed by the Orchestra San Marco of Pordenone, joined by two musicians specializing in Celtic music, all under the baton of Ben Palmer, who’s also done the orchestration. The event takes place thanks to the generous support of the Sunrise Foundation for Education and the Arts.

As we’ve done in the past, Sacile is hosting our pre-opening event on Friday, Sept. 30 at 8:45 p.m. at the teatro Zancanaro with a screening of Up in Mabel’s Room (1926) directed by E. Mason Hopper and starring Marie Prevost. An enormously popular actress with a flair for comedy, she’s ideally cast as a fashionable young lady who, among other items of clothing, sports an embroidered babydoll that causes a series of misunderstandings which drive the narrative. The film is presented with a new musical score by Günter Buchwald, who will also be conducting the Zerorchestra. Up in Mabel’s Room is repeated at the Verdi on Thursday, Oct. 6 as one of the special events during the Giornate, and comes courtesy of the UCLA Film & Television Archive, who kindly scanned an unrestored element so the film could be shown this edition.

One of the most anticipated events is Robert J. Flaherty‘s Nanook of the North (1922), screening Sunday evening, Oct. 2. The film is the result of Flaherty’s long association with the Inuit people that began eleven years before the film was made, when the director was exploring the Labrador regions on behalf of the Canadian government. Nanook showcases the lives of the Arctic peoples and the harsh struggle to survive in an inhospitable environment. Considered a milestone in ethnographic documentary filmmaking, although it’s also been criticized for staged sequences, the film is still considered by the Inuit themselves to be an important record of their culture, and this year they celebrated its centenary. The film’s accompaniment, composed by Gabriel Thibaudeau, is performed live by a flute quartet of the Orchestra San Marco and features two Inuit throat singers brought from Canada, Lydia Etok and Nina Segalowitz, and soloists Alberto Spadotto and Anna Viola.

We remain in the Great North with our mid-week event on Wednesday, Oct. 5 at 9 p.m.: Gunnar Sommerfeld‘s 1920 epic Borgslægtens Histoire (The Story of the Borg Family) based on the Danish-language novel of the same name by Icelandic writer Gunnar Gunnarsson. The film, made in Denmark and filmed entirely in Iceland using both Icelandic and Danish actors, is the grand story of two brothers, set against the majestic Icelandic landscape that made shooting conditions extremely rigorous due to atmospheric difficulties and the constant need to move personnel and technical equipment. Acclaimed at the time by audiences, the film remains a landmark in Icelandic filmmaking. The reconstruction was carried out in 2020, for the centenary by the Icelandic National Film Archive, the Gunnar Gunnarssonn Institute and the Akureyn Cultural Association; the new musical score composed by Thordur Magnusson also uses folk motifs from Iceland, and will be performed by a nine-piece orchestral ensemble conducted by Bjarni Frimann Bjarnason.

An extensive section this year is devoted to Ruritania, that mythical realm located generically in the Balkans that originates from Anthony Hope‘s 1894 novel The Prisoner of Zenda, which enjoyed such enormous success in the cinema that its echoes have lasted for decades: one need only think of Roman Holiday. Ruritania can be considered a true genre in which romance and swashbuckling adventures are intertwined, often against the backdrop of dynastic struggles that drew inspiration from turbulent historical events that played out in Central European countries before and immediately after the Great War. Along with fiction films from the U.S., Italy, Denmark, Sweden and the UK, the series also includes newsreels showing the real rulers of the Balkans, including Queen Elena, the Montenegrin-born wife of King Vittorio Emanuele III of Italy.

Fiction films include the 1912 Italian Sui gradini del trono (On the Steps of the Throne); the American Three Weeks (1924), newly reconstructed by the Cineteca del Friuli from the only surviving material, housed at Gosfilmofond (the digital elements were sent to the Cineteca several months before the Russian invasion of Ukraine, and there has been no communication between the archives since); the Swedish Hans Kungl. Höghet Shinglar from 1928, and the British The Runaway Princess (1929) by Anthony Asquith, from Elizabeth von Armin’s novel The Princess Priscilla’s Forthnight. There’s no shortage of parodies in the program, such as Rupert of the Hee Haw (1924) by Percy Pembroke with Stan Laurel; and Leo McCarey‘s Long Fliv the King (1926), in which we find Oliver Hardy with two other formidable comedians Charley Chase and Max Davidson.

Speaking of Oliver Hardy, we find the great comic together with Stan Laurel in the Rediscoveries and Restorations section with Ladroni, one of the duo’s few Italian-language films, released in 1930 in that brief moment just after the transition from silent film to sound, when the actors would reshoot scenes in foreign languages or dub them themselves. The Italian version has been hypothetically reconstructed by the SOS Laurel and Hardy project in collaboration with the L’Aquila Film Institute La Lanterna Magica using the Spanish phonetic version, Ladrones, and at 39 minutes long runs a full 15 more than the American original Night Owls.

One of the most interesting titles in the Ruritania section, Graustark (1925), makes a convenient link to our other major retrospective, devoted to Norma Talmadge. At the height of her fame she was named by exhibitors as one of just four stars capable of filling theaters (the others were Chaplin, Pickford and Fairbanks), but with the coming of sound she retired and her films became ever more difficult to see. But thanks to a collaboration between the Pordenone Silent Film Festival, the Library of Congress and Cohen Media, we can appreciate the range of this great star, from her early days with Vitagraph to the big-budget features she made with her producer husband Joseph Schenck. These include Graustark directed by Dimitri Buchowetzki (in which Joan Crawford can be spotted as an extra), Frank Borzage‘s 1925 marvelous The Lady, and Charles Miller’s 1918 Ghosts of Yesterday (1918), an adaptation of Rupert Hughes’ play Two Women clearly inspired by an 1862 text by Friulian playwright Theobald Ciconi, La statua di carne.

Included in the Canon Revisited: La Dixième symphonie (1918) by Abel Gance, one of the most brilliant and powerful filmmakers, not only of silent film; Europa (Poland, 1931-32) by Franciszka and Stefan Themerson, a poetic anti-fascist short that had a great influence on avant-garde cinema in the period between the two world wars; Manolescu, the first major production by Ukrainian director Viktor Tourjanski made in Germany in 1929 with great actors such as Ivan Mosjoukine, Brigitte Helm and Dita Parlo.

The festival pays tribute to the 90th anniversary of the Venice Film Festival with a section devoted to all the silent films shown at that first edition in 1932, including Regen from 1929, directed by Joris Ivens, an influential short that established the Dutch director as one of the most exciting documentary filmmakers.

The annual “Early Cinema” section will take us around the world, while Jean Epstein‘s 1923 documentary La montagne infidèle will inspire with its close-up footage of the eruption of Mount Etna and its river of lava. For many decades this was long considered a lost film, so its discovery by the Filmoteca de Catalunya (which also oversaw its restoration) fills a crucial gap in the development of this key figure, who himself placed La montagne infidèle among his important works.

The Film Fair is back after a small hiatus, and of course the Collegium, the Pordenone Masterclasses, and the Jean Mitry International Prize, which since 1986 has been awarded to personalities or institutions that have distinguished themselves for their work in restoring and enhancing the heritage of silent films; the prize is supported by the Fondazione Friuli.  We’re especially proud to announce a new initiative this year, the first of an annual lecture on costume design in silent cinema, the brainchild of Deborah Nadoolman Landis (The Blues Brothers, Raiders of the Lost Ark). The inaugural lecture will be given by costume and fashion historian Michelle Tolini Finamore, who will discuss the importance of this art form, making connections to this year’s program.

Italian silent cinema is celebrated in the documentary Italia. Il fuco, la cenere by Céline Gailleurd and Olivier Bohler, which poetically uses images from the period to showcase the beauty and innovation of the peninsula’s film heritage, narrated by Isabella Rossellini.

Thanks to streaming and our partnership with MyMovies, it will again be possible to follow the festival from anywhere in the world. The online program, running from Saturday, October 1 to Saturday, October 8, includes a selection of titles from the different sections as well as discussions with authors presenting their newly published books.

The Pordenone Silent Film Festival is made possible thanks to the support of the Autonomous Region of Friuli Venezia Giulia, the Ministry of Culture – General Directorate of Cinema, the City of Pordenone, the Pordenone-Udine Chamber of Commerce and the Fondazione Friuli.