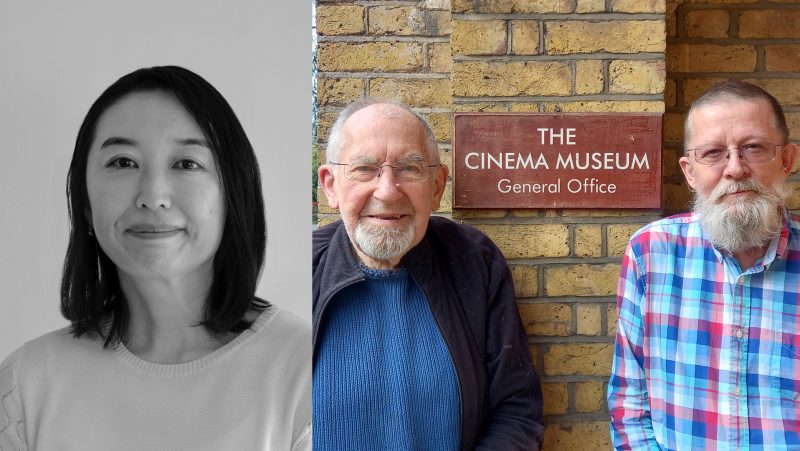 THE 2021 JEAN MITRY AWARD
GOES TO JAPANESE ARCHIVIST AND SCHOLAR KAE ISHIHARA AND TO RONALD GRANT & MARTIN HUMPHRIES, CO-FOUNDERS OF THE CINEMA MUSEUM IN LONDON

Every year, the Pordenone Silent Film Festival assigns an international prize, the Jean Mitry Award, to individuals and institutions who have distinguished themselves in the work of recovering and enhancing film heritage. Established by the Province of Pordenone in 1986, the award has now reached its 36th edition and has been supported since 2017 by the Fondazione Friuli. The award will be delivered by the Fondazione’s vice-president Bruno Malattia on today at 9PM at the Teatro Comunale Giuseppe Verdi in Pordenone during the 40th edition of the festival. Alongside this year’s winners, the archivist and scholar Kae Ishihara and Ronald Grant & Martin Humphries, co-founders of The Cinema Museum in London, the prize will be delivered also to Hungarian historian and archivist Vera Gyürey and American independent scholar J.B. Kaufman, the winners of last year’s edition who were unable to accept their prizes in person due to Covid-19.

Kae Ishihara (Ph.D. in Archival Science) studied at the L. Jeffrey Selznick School of Film Preservation at the George Eastman Museum in Rochester, New York. She founded the Film Preservation Society, Tokyo (FPS) in 2001 and has been promoting the importance of film preservation through activities such as “Adopt-a-Film”, which aims at the discovery, restoration and screenings of long-lost Japanese silent films, the community-based film archiving project “Bunkyo Film Archive”, and “Film Salvation Project” to save films and videotapes damaged in the recent earthquake and tsunami; she is also a driving force behind Home Movie Day in Japan since 2003. She teaches part time at Japanese universities and is also the author of History of Film Archiving in Japan (Bigaku Shuppan: Tokyo, 2018), which received the Hiroko Nogami Memorial Award for Art Documentation in 2019.

Ronald Grant and Martin Humphries co-founded The Cinema Museum in London in 1984, now based in the Master’s House of the Old Lambeth Workhouse, the place Chaplin had to enter several times in his youth. Set in historic surroundings in Kennington, close to Elephant & Castle, the Museum houses a unique collection of artifacts, memorabilia, photos and posters, books, film journals and equipment that preserves the history and grandeur of cinema from the 1890s to the present day. The Cinema Museum’s collection was founded from Ronald and Martin’s own private collection.
Though unfunded, the Museum, which is a registered charity since 1986, has been offering guided tours and a full programme of events, including silent film screenings with musical accompaniment for which Silent London awarded the Museum as “best venue for silent film” in 2018 and 2020. The Cinema Museum is currently in danger as the old Lambeth workhouse sits on a larger piece of land which has been purchased by property developers. The Museum has been involved in a 15-year-old battle to rescue this beautiful but crumbling grade 2 listed building. The petition “Save the Cinema Museum” aims to ensure that it remains open for public and community use and provides a permanent home for The Cinema Museum. The Jean Mitry Awards testifies to the Pordenone Silent Film Festival’s support of the Museum and its intense and worthy activity.

As a Hungarian language and literature teacher, Vera Gyürey has been promoting cinema in high schools since the 1960s. She was appointed in 1985 by the Magyar Nemzeti Filmarchívum, Hungary’s national film archive, and became the institution’s director from 1990 to 2011, playing a pivotal role in the conservation and restoration of the Hungarian film heritage. Az utolsó éjszaka [The Last Night] by Jenő Janovics from 1917 was one of her restoration projects during her tenure and later the film was screened at Pordenone in 2002.

Film historian J.B. Kaufman is one of the greatest connoisseurs of Walt Disney. He is the author of Walt in Wonderland, co-written with Russell Merritt (Jean Mitry award in 2018) and winner of the prestigious Kraszna Krausz Award. The book was published by the Pordenone Silent Film Festival in 1992, during the retrospective dedicated to Disney’s silent period. His second volume, Silly Symphonies, was published in 2006 by the Cineteca del Friuli. Walt Disney’s daughter Diana entrusted J.B. Kaufman with the authorship of several books including South of the Border with Disney and a definitive story of her father’s two masterpieces Snow White and Pinocchio. Kaufman has been also a recurring contributor to the journal Griffithiana and the Giornate’s Griffith Project.