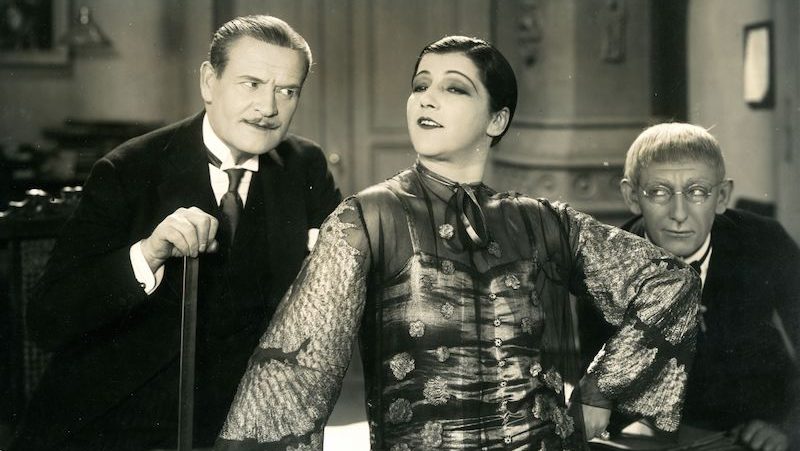 EARLIER, A SCREENING OF CARMINE GALLONE’S RARE THE SHADOW OF A THRONE WITH SOAVA GALLONE, DISCOVERED IN THE PRAGUE FILM ARCHIVE

Without a doubt Pordenone’s 40th edition of the Giornate del Cinema Muto has introduced us to a great figure of German cinema from the 20s. Ellen Richter was an actress capable of easily switching from one genre to the next, gifted with a magnetic personality that would, figuratively speaking, pierce the screen with each performance. Showing today at the Teatro Verdi, Moral (1928) sees Richter in the starring role of a leader of a theatrical troupe who is banished from a small town after attempting to unleash a Berlin revue considered to be too saucy by the locals. Richter’s Ninon d’Hauteville finds work as a piano teacher and the very same townsmen who shamed her are the ones lining up to take her music lessons. As revenge, Ninon secretly records their visits. A memorable sequence sees a client locked in a bathroom and attempting to destroy incriminating evidence by shredding the film and flushing it down piece by piece. Showing before Moral we have Die Schönsten Beine von Berlin (Saucy Suzanne), taking us into the world of revues which Richter and her husband Willi Wolff came from.

The Giornate will be screening The Shadow of a Throne (1921), directed by Carmine Gallone, one of Italy’s most notable and prolific filmmakers whose long career spanned from 1914 to 1962 and whose film looks forward to the festival’s Ruritania programme next year. A fictional country situated between central Europe and the Balkans, Ruritania prompted a series of genres such as adventure, fable, romance, spy thriller and court drama in the first two decades of the twentieth century. Its birth was in many ways due to the success of popular literature and the public’s fascination with Europe’s royal families. Soava Gallone, the director’s wife since 1911, is the star of The Shadow of a Throne and was Gallone’s muse during the silent era.
Screening before the Gallone is a short film presented by the Cineteca del Friuli, Sign of the Black Lily (1913), an Italian detective story with an impressive foreign distribution.
As part of the Nasty Women programme, don’t miss the feature Phil-For-Short (1919), screening at 2:30PM. Directed by Oscar Apfel, it stars Evelyn Greeley as a rebellious tomboy who falls for a misogynist. The hilarious dialogue is penned by screenwriter Clara Beranger, whom we already met with the screenplay for Miss Lulu Bett. Also on Thursday is Le Ménage Dranem (1912), a short on the revolutionary theme of the feminism and its consequences: it records Monsieur Dranem while he cooks, cleans and sews “like an elephant trying to pass a thread through a needle”, while his militant spouse walks around in slacks, smokes a pipe, downs pints of beer, plays cards at the park and attacks her fearful husband.
Beginning at 5:30PM the Korean programme presents two silent films from the sound era. First, a crime melodrama from 1948, Geomsa-Wa Yeoseonsaeng [A Public Prosecutor and a Teacher]. Korea in the aftermath of World War II saw its film industry on its knees and returning to the silent form as a way to save costs. Korea’s last byeonsa narrates the film, the equivalent of the Japanese benshi narrators. The second film, Han Seongsimui Him [The Power of Sincerity] is a short from 1935 commissioned by the film department of the Japanese general governorship in Korea in an effort to urge citizens to pay taxes.
The two films forming part of the Nasty Women retrospective will also be available online, as always on MYmovies from 9PM (Italian time). For the book presentations, online at 5PM, Elif Rongen-Kaynakçi from the EYE Filmmuseum of Amsterdam will present the DVD/Blu-ray disc of Filibus: The Mysterious Air Pirate, a film that combines thriller, feminism and steampunk. Katharina Loew, author of Special Effects and German Silent Film, will speak on the influence that special effects had on German silent cinema.